Powered by mp3skull.com SI QUIERE REVISAR ESTA EN OTRO IDIOMA SELECCIONE IDIOMA ABAJO: IF YOU WANT TO READ THIS IN ANOTHER LANGUAGE CHOOSE LANGUAGE BELOW:
I left Belize City around 5pm Sunday Feb 24th.  The one hour flight to San Salvador (SS) went well.    Off to the Taca lounge in SS for about a 90 minute layover.   I don’t mind the wait when you can relax in comfortable sofas, have a few drinks and snacks, and a good Internet connection.  I know the lounge well as SS is the stopover from LAX to Belize.

Next leg – the flight from SS to Lima was only about 4+ hours+, a bit shorter than I expected – just can’t keep track of my schedule well.  Also, right after take-off we got served dinner.  Nice caprese salad, filet mignon with mashed potatoes, red wine, and some type of luscious chocolate desert.  The flight attendants speak English but sometimes their accents make it hard for me to understand fully so not sure what it was.

Then for a nap - which ended up being only about 90 minutes before they start announcing to prepare for landing in Lima.  Not a bad flight but now the ‘troubles’ begin.   Customs and immigration go fine.  Then I went looking for the Taca lounge (which they didn't have).  I followed the Spanish signs to domestic flights (not much here is in English) but a lady guard stopped me and kept saying something and indicating I couldn't go in there.  Finally got a guy who was bi-lingual who informed me the gate area was closed from 130-230am for cleaning.  Sigghhh.

I wander around trying to find the Taca lounge (which didn't exist) and for some reason looked at my tickets.  Seems my boarding pass to Cuzco showed departure about 3 hours later than I originally thought.  I went looking for a Taca counter.  I saw it 20 feet away from the railing in the arrival area but the guard wouldn’t let me go in – I had to go outside, down the walk and then back inside to the departure counter area.   Over to Taca which was the afore-mentioned 20 feet from the guard.   Sighhh.

Talked to the agent and yes my original flight had been delayed for 3 hours - something about no equipment (plane?).  Hmmm.   However, she could get me on an earlier flight.  OK…but what about my luggage?  She made a quick call and located my bag.  She sent me past the not-so-friendly guard who refused me entry earlier.  Over to the luggage area and got my bag, no problem.  Back to the Taca counter, this time Mr. Friendly Guard let me pass without walking clear around.  Abundance is finally mine.

The agent had it all figured out for me and changed my boarding pass.  Ironically, this flight arrived in Cusco only about 30 minutes before my original flight.  Oh well.  She also advised me they had no lounge.  Sigghhh.

Off to my gate – which was now available after the cleaning was done.  I’m like 2 hours early so found an area where the seats had no arms making for a nice couch-like place to try to sleep.   Dozed off for maybe an hour and then the people started arriving for the flight.   I heard an announcement in Spanish but had no idea what was said – even when it is made in English the speakers are so bad and the accent so strong I still had idea what was happening.   The people started standing up and going to the gate so I got up too.  They then all lined up in the Executive Class line which was odd since I know they didn't have that many Business Class seats.  I went around them to the agent and she let me go by and board first (which I pay for) and then she asked the rest to move to the peasants, err…..coach line.

The flight was short – less than an hour and one drink.   Cusco is a small airport in the mountains.  As we came in low over the city I could see us pass the airstrip.  Hey, you missed it.  Nope.  A hard bank to the left, around a tall mountain and down to the strip.  Wow.  Yep, welcome to Cusco, like maybe 12,000 feet elevation?  Got my luggage quickly and out past all the tour desks hawking their packages.  Outside to the cold air.  Brrrrr. We’re not in Belize anymore.

My new friend and tour guide Lynda was to meet me around 8am as she had no idea my flight had been changed.  But, I was only a half hour early.  I found a seat outside in the chilly air and waited.  Fortunately I put a sweatshirt in the outside section of my luggage.  She arrived on time and had a taxi waiting.  All was well.   I didn't have to fend for myself in a non-English speaking country.  Yayy. 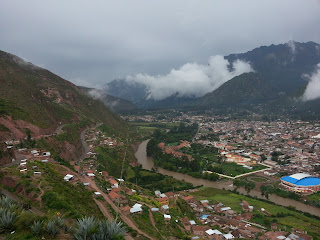 Off to Urubamba where she lived and had me booked at the Amaru Valle Hotel (B&B).    About a 45 minute ride through beautiful mountains, and then down about 2000 feet.  Great views all the way and helpful narration by Lynda of this new (to me) land.  The hotel was up the street about 6 blocks from the cute town square.  Very interesting buildings and locals everywhere.  Remnants of  hundreds of years past with upgrades keeping mostly in the old traditional styles.  Up the hill and onto a (very) rough narrow street for about 2 blocks.  The taxi shook and rattled all over.   But we made it fine. 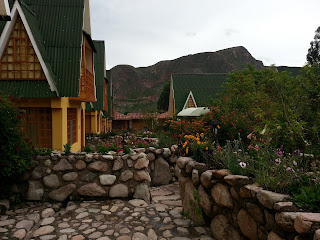 Amaru is very cute and exudes a feeling of peace and relaxation with its beautiful A-frame yellowish cottages and gorgeous gardens in between.    Quiet too, since I was one of only a few guests who came and went.  It was, of course, off season.

I forget the first day in Peru since I was sooooo tired and the high altitude was starting to affect me, even though I didn't realize it.  Sea level to over 10k in 14 hours with little sleep is no fun.   I do recall I slept around 11 hours straight that first night.  Then a slight headache, minor stomach discomfort, and hard shallow breathing.   Weird feeling.   Was this a sign of the way it would be for 2 weeks?   Nahhhhh…..

I’ll update this later with Lynda’s help to refresh my memory.  Then next comes the Inca ruins...wowww.