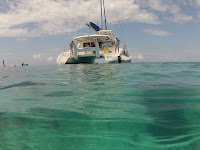 Had a super day on this sailboat. It was a day-trip out to 3 of the local cayes (islands) for snorkeling, swimming, walking on beach, and attempts at fishing. A good friend (Cindy)'s mother (Vickie) was visiting and had won this trip for 8 (with a case of beer) last year while she was here for lobster fest. Along was Vickie's husband and his friend; Cindy's good friend Wanda; Cindy's boyfriend Dwayne and his brother Garrel; and Cindy's daughter Layla and her friend Amy.

There wasn't much wind but we still had a great day. Dwayne made some great shrimp ceviche which tasted super - I saved some shrimp out for bait but didn't have much luck. I had brought the 2 girls Barbie fishing rods but they ended up to be more problems than good. 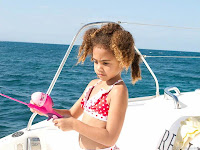 Barbie doesn't make the best fishing equipment but we all gave it a good try. 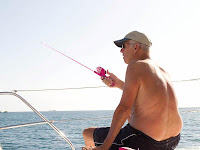 The past week or so has been a whirlwind. After being in Calif only a few weeks I returned to Placencia on Feb 22d. My friend John from Indianapolis came down the next day. We each had a room at One World, the cute resort in town where I had stayed 3 weeks in Jan. I picked him up at the Placencia airstrip. There was a cool ultralight plane there so we talked with the pilot some. It is something I'd like to pursue down here some time.

I showed him various resorts and properties I have been looking at. It helps to have a second opinion, especially his since they have lake property in southern Ind and a condo in Florida.
I showed him around Placencia more on Thur the 23d.

On Frid the 24th we went on the Monkey River boat tour. I had done it before but it is such fun I didn't mind doing it again. Each guide makes it a bit different. Ours gave us much more info on the trees and vegetation. We didn't see any crocs along the river but when we got on shore we immediately saw several monkeys about half way up the trees. 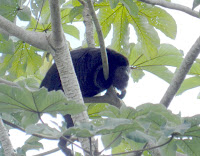 They are so interesting and make such loud noises - especially with the guides knocking on the tree they are in and imitating their howls. 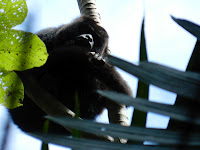 On this trip we swam in the river some. It was so refreshing...clear cool rain water from up in the jungle. Of course the guide has to run up the bank and say he saw a croc. Didn't bother me but freaked out some of the others.

Sat. the 25th we headed west in my truck for the Cayo District. You have to drive past Belmopan the capital so we decided to find the zip line place just north of there that I had heard about. What a great stop. We were the only 2 with 2 guides. I think we had 8 or 9 runs on the zip lines. What a rush. Our guides joined in with our craziness and we had an amazing time. Here's John on the platform: 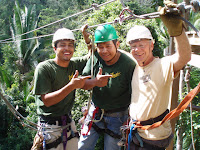 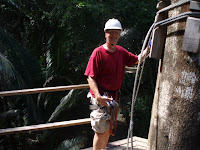 I have some great videos but can't post them here so will add a link soon. This was the most fun I've had in a long time.

We had to move on since our plan was to get to San Ignacio for the night. I had emailed a jungle resort for availability so we stopped at the Cahal Pech Resort where I had stayed before so I could check my email. It is high on the hill next to a Maya ruins and has an amazing view of the city. 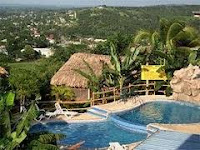 The jungle resort had no availability so we were lucky to get a 2BR balcony suite at the Cahal Pech Resort. Another great bargain for the room we got.

We booked the Actun Tunichil Muknal (ATM) cave tour through them that eve. Another amazing adventure. After a mile hike through the jungle and across 2 knee deep streams with slippery rocks we made it...then a brief swim in a pool to reach the entrance of the cave. 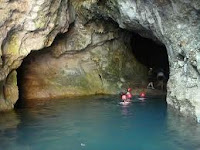 From there it was complete darkness other than from the lights on our helmets. Hiking through narrow passages, sloshing through water up to your chest at times and soaking in the amazing history there was a truly spiritual experience. 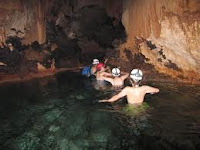 Just inches away we saw 3,000-year-old untouched relics of Mayan ceremonies inside the cave. Pottery that you would only see behind glass in a museum. 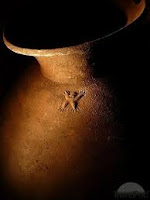 Culminating in an actual full skeleton of a person laid out as a offering to the gods.

The ATM is a must-see tour...if you can handle the darkness, squeezing through tight spaces, and hiking in water at times up to your chest. Kinda freaky for some. The one lady in our group of four was a bit apprehensive at times but was a real trooper and made it all. John and I totally loved it.

We stayed another night at Cahal Pech and Tues the 28th we were off to Caye Caulker, an small laid-back island off the coast near Belize City. In that area the barrier reef is just a mile or so away so is a great place for snorkeling and scuba diving.

We parked the truck at the Municipal airport and took a 20-minute hop to Caulker. Beautiful views in the small plane - a tour itself. On landing, a golf cart taxi was awaiting us. We explained what type of hotel we wanted and gave him some recommendations a friend had given me. We drove around the tiny island looking at several places. None met out wants or had availability. The driver saw a real estate person he knew and they showed us a super 2BR, 3d floor, beach-front condo for another great price. 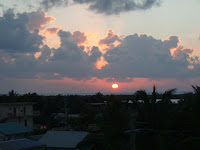 We were on such a streak we should have bought lottery tickets.

We stayed there 2 nights and went on a snorkeling trip on Wed the 29th, to the Hol Chan Marine Reserve and Shark Ray Alley. My pictures don't do it justice but I borrowed some that does show what we did and saw: 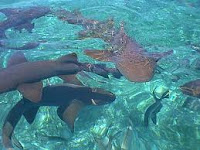 John helped the guide throw the chum into the water and as he was leaning over to wash his hands one of the fast-moving jack nipped him and cut his finger. Bled pretty bad so we stayed away from him while we snorkeled (not really, the cut wasn't all that bad). I'm sure the story he tells back in Indy will be it was an 8-foot great white shark that he had to hit with his hand to scare it away.

Caulker is a small island with only golf carts and bikes so we toured the whole place in no time in our rented bikes. John had to fly out of Caulker Thur morning Mar 1st but I decided to stay another night. They gave me an even better rate since I was only using 1BR. I hung out at the pool and toured the island more, checking out the water sports, e.g., paddle boarding, windsurfing, etc. The next morning the wind had blown up very strong so I wasn't about to fight it. I decided to check out and fly back to Belize City the morning of Frid the 2d.

I drove around the city a bit and decided to head north to the Orange Walk and Corozal districts. Areas I had not been to before. I didn't miss much. Being close to Mexico I stayed in Corozal which is near the Mexico border. I found an intersting place to stay, La Palmas: 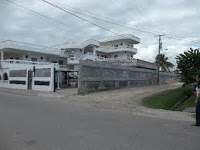 It is owned by a chiropractor from Texas who flew planes in Alaska and met his wife of 20 years in Columbia. They had done missionary work in Corozal area years ago and liked it so much they bought the resort and remodeled it. You hear some interesting stories while traveling. Everyone has a story...my new slogan.

Today I drove back 'home' to Placencia. I left at 9am and arrived around 4pm. long day...long drive. I did stop several times and even took some short side trips. That's what a road trip is about. Now I've been to every district in Belize.

John and I had a super time, we got along just great and the last-minute itineraries and accommodations happened better than we could have planned it. Come on down, I'll be your tour guide.
Posted by Donald at 19:26 No comments: